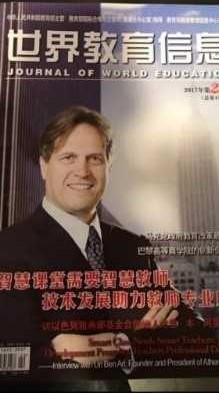 Chen (Charles) Yidan, co-founder of Chinese Internet giant Tencent, a leading Chinese philanthropist, and founder of the Yidan Prize Foundation, which awards the Yidan Prize for education, mentioned Athena Fund in a Nikkei Asian Review article. Discussing changes that need to be made in education. Yidan cited Athena’s initiatives as an example of successful implementation of advanced technology in education.

Ben -Ari has lectured on Athena Fund’s success at several UN international conferences on technology in education in Europe, Africa and China. In addition, he has spoken at the international Women's Forum for the Economy & Society in Paris in 2017 and at other global conferences.